Q: At what age can a child start learning how to play billiards and what are the best games to start with?

A: Kids can start enjoying billiards at any age, but I would suggest not before five-years-old. The one thing to remember is to have them stand on a footstool or a box, so they can reach the table and not develop any bad habits in their stroke. The best way for kids to learn is to have them just shoot balls into pockets, without using the cue ball. Once they get the hang of that, introduce the cue ball and simply spread the balls out on the table and let them have fun with it. I would not introduce them to a particular game until they have played for a while, and then I think Straight Pool or 8-Ball would be the best option. 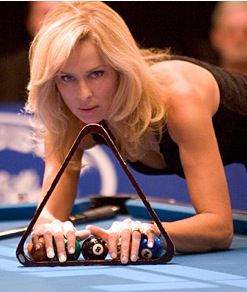 —Ewa Mataya Laurance is one of the most visible superstars in the history of pocket billiards. Known as The Striking Viking, she took the billiard world by storm since she moved to the US from her native Sweden.

Following her childhood dream of becoming the best in the world, she continues to be a dominant presence on the international billiard scene.  Ewa is the current International and World Cup Trick Shot Champion, the holder of multiple World and US Open 9-ball titles, and has also won the Swedish, European and US National Championships in her incredible career. A former # 1 ranked player in the world, Ewa has received Player of the Year honors, been named WPBA Sportsperson of the Year, and in 2004, was inducted into the prestigious Billiard Congress of America Hall of Fame.